Deluxe Barber College is committed to maintaining an educational and working environment free from all forms of sex discrimination, including sexual misconduct, domestic violence, dating violence, sexual assault, and stalking. Such misconduct will not be tolerated. These acts not only violate a person’s feelings of trust and safety but can also substantially interfere with a person’s education or employment.

It is the policy of the Deluxe Barber College that, upon learning that an act of sexual misconduct, domestic violence, dating violence, sexual assault, or stalking has occurred, prompt and appropriate remedial action reasonably calculated to stop the misconduct shall be taken. Disciplinary sanctions for any student or employee of  Deluxe Barber College engaging in conduct prohibited under this policy includes the suspension or dismissal/expulsion of students, the suspension or termination of employment or other appropriate disciplinary action such as warnings, reprimands and educational sanctions, as well as possible referral for criminal investigation and prosecution under Texas  law.

As a recipient of federal funds, all students and employees of Deluxe Barber College is required  to comply with Title IX of the Higher Education Amendments Act of 1972 (“Title IX”). In accordance with Title IX, as well as applicable state and federal law, Deluxe Barber College prohibits discrimination on the basis of sex in its education programs and activities, admission, and employment. Prohibited sex discrimination includes sexual harassment, as defined in the policy.

Reporting: Deluxe Barber College encourages, its student and employee the prompt and accurate reporting of sexual misconduct, domestic violence, dating violence, sexual assault, or stalking. This allows the school to respond quickly to allegations and offer support to individuals who may have been subjected to these forms of misconduct. Deluxe Barber College is committed to protecting the confidentiality of victims, wherever possible, and will work closely with individuals seeking confidential assistance regarding misconduct under this policy. Certain professionals are permitted by law to offer confidentiality. All allegations will be investigated promptly and thoroughly, and both the accuser and the accused will be afforded equal rights during the investigatory and adjudicatory process.

Dating Violence: "Violence committed by a person who is or has been in a social relationship of a romantic or intimate nature with the victim.

(ii) For the purposes of this definition—

Domestic Violence: "A felony or misdemeanor crime of violence committed

Examples of domestic violence and dating violence behaviors or activities directed against a family member, a household member, or a person one is dating or has dated include, but are not limited to:

Sexual Assault: "An offense that meets the definition of rape, fondling, incest, or statutory rape as used in the FBI’s UCR program” (34 C.F.R. § 668.46(a).) The Federal Bureau of Investigation’s Uniform Crime Reporting Program defines these offenses as follows:

Rape: "The penetration, no matter how slight, of the vagina or anus with any body part or object, or oral penetration by a sex organ of another person, without the consent of the victim." (Appendix A to Subpart D of 34 CFR Part 668.)

Sexual assault can be committed by any person against another person, regardless of gender, gender identity, sexual orientation, or past or current relationship status. Sexual assault may occur with or without physical resistance or violence.

Any incident meeting one or more of these definitions is considered a crime for the purposes of Clery Act reporting. It is also a violation of Deluxe Barber College and is prohibited.

Stalking: "(i) Engaging in a course of conduct directed at a specific person that would cause a reasonable person to—

For purposes of this definition—

Examples of stalking behaviors or activities, when conducted in connection with the above definition, include, but are not limited to:

Engaging in such stalking behaviors or activities is a violation of Deluxe Barber College policy and is prohibited. 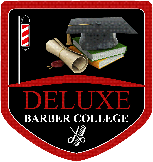